What a day.  This morning when my son Wyatt got up for school he said, "Mom, Daisy's shaking".  I immediately got concerned because when she was a puppy she got into something (we never did figure out what) and she ended up on IV's for 3 days with vet bills we certainly don't need right now. The vet said the shaking is a sign of poisoning and he even took her home with him one of the nights. (our vets son is Wyatt's best friend, and he has always been great with our animals) After she came home she was fine.  Then recently our oldest daughters little Pom (Bella) also got into something (also unknown) and $550 later she is fine. So I called my husband at work and he researched on the computer to try to figure out what she had gotten into. We were not happy to discover that almost everything is toxic to dogs.  Most of us know about chocolate and salmon--but had you ever heard garlic, onions, daffodils are all poison to dogs? The list goes on and on. Really makes me worry about Janae's little Bella because she will eat anything.  We are living in a new to us house that has almost every kind of plant imaginable! So she seemed like she was getting better on her own and my Mom and I went for our daily walk. When we got back she was shaking again. I was starting to panic. Janae let me know that the vet gave Bella activated carbon to absorb the poison. I researched it on the computer and also talked to a friend whose dog almost died from getting into rat poison and everyone said to give her some.  So I did...and honestly she probably should go to the vet but from what I had learned the activated carbon is something you can give them while on your way to the vet.  I also gave her some lunchmeat because I thought maybe diluting the poison would be a good idea. Though depending on what kind of poison it is that could be bad, or good. Again, if we were not so broke right now I wish I could have rushed her to the vet.  Janae did tell me she would loan me money for the vet bill so if she got any worse I would have taken her.  But shortly after eating she seemed better though still shaking. She went to sleep and my son Wyatt and I walked to Walmart to buy some canned dog food (my husband had my car because he is in a cast from recent surgery and can't drive a stick shift and I just don't like to drive his truck) and on our way Chantel texted me that in her sleep Daisy had stopped shaking.  Now it has been several hours later and she is still sleeping most of the time and has not been shaking at all. So I feel more comfortable now that the worse is over. I gave her a lukewarm bath to cool her because it is so hot and humid here. So I just wanted to post this so anybody out there could send their prayers for our little Daisy.  We want her back to her normal sweet self. 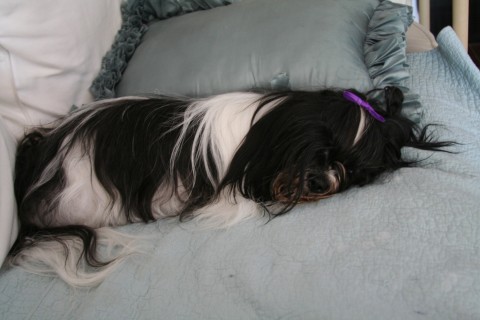 I'm sorry about what Daisy and you all are going through. I pray for a speedy recovery!

awwwe little daisy may may I love you! Feel better. Bella & I will be praying for you!

what a cute bundle of fur. Hope Daisy is better really really soon.

Prayers for your beloved Daisy and your whole family for strength.

I was so glad to get on your blog this morning and hear that Daisy is feeling better. I've been praying for her off and on since we walked yesterday. She is precious and I know how much you all love her. Much thanks to all of you who have been praying for Daisy.

What an awful scare! Your little Daisy is adorable. So happy to hear she's doing better.

Our little dog has done this before, too, but not quite as bad as your precious Daisy. I agree, it's very scary. Glad she's doing better.