The Rescue of Dahlia

I am an animal lover.  I always have been my whole life. Recently Janae found a dog wandering in her neighborhood and she sent me this picture. 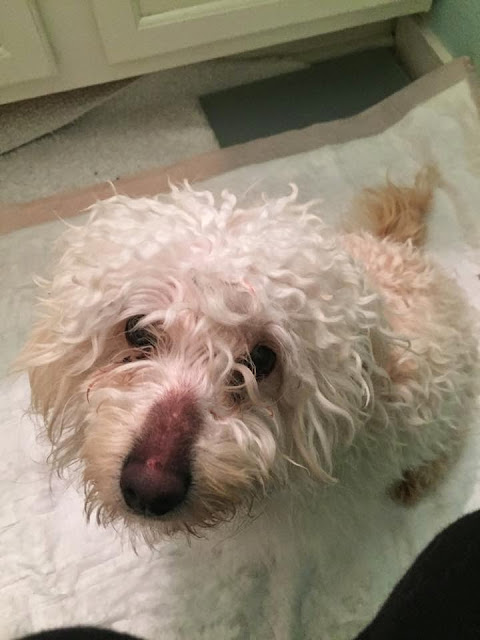 She said she was the sweetest dog. She was dirty, matted, and starving and Janae thought she was pretty young. Little did I know at this point she would become part of our family.

Janae started the process of finding her owner. She posted in the classifieds and found out that the dog lived just a few houses away from her. She lived in a tiny cage full of poop. Outside in the elements no less. Her nose was swollen and hairless from rubbing her nose on the cage. She was so skinny I guess they just didn't feed her. 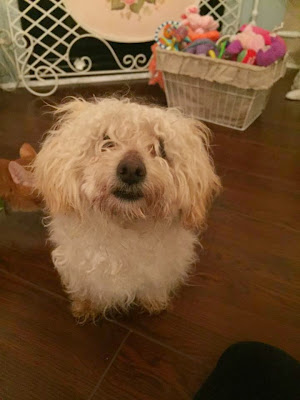 Janae gave her a bath and she looked pretty pitiful...but so sweet. So not deserving the life she was living. 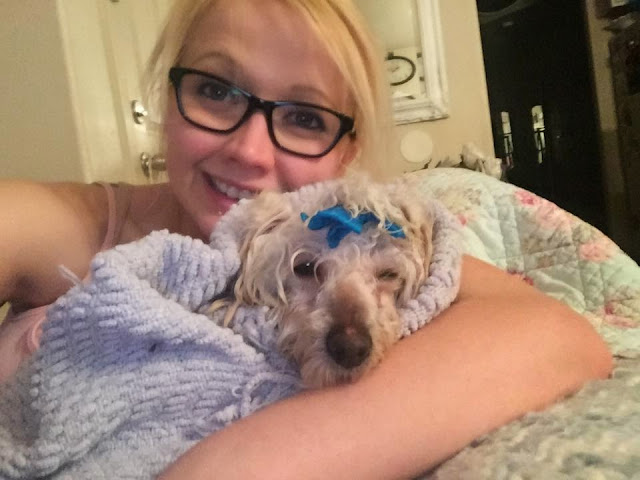 When Janae found this out she just wanted to hide her away. We realized we had to let the owners know we had her because that was the only legal thing to do. We decided to ask the owners if we could take ownership of her.

Janae already has 4 dogs which is the limit in our town so we decided she would be ours. I left a note on the owners door because they would never answer and they called me. They said they would not turn her over to us. They said they had bought her from a breeder in California and that she was a papered Poodle. They told me she was nine months old. I talked to them about the bad condition she was in and they said they worked a lot. I told them that was not excuse for starving her. They said she didn't eat much-but in our care she gained 2 pounds in a week. I told them I was going to take her to the shelter so her abuse could be documented and they could go get her there. I asked if had her licensed and they said that was none of my business. I let them know it would cost money for them to get her out but I didn't feel right handing her over any other way. They said that was fine and for me to please call them when she was there so she could go get her right away. I told her I would take her to the shelter on Monday morning. 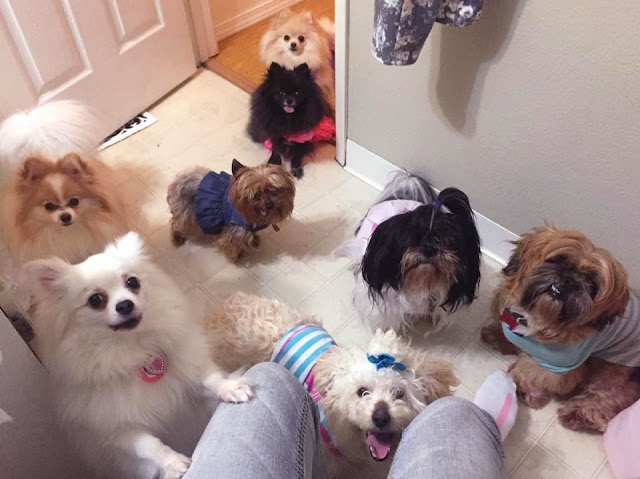 She fit in so well with our family of dogs (Janae's and ours) that we all felt so bad she had to go back. I looked into it and there was really no legal thing we could do. I think they almost always give people a second chance to treat their pets right. It was heartbreaking. Janae still wanted to find a way to "lose" her or something so she didn't have to go back to the bad situation. 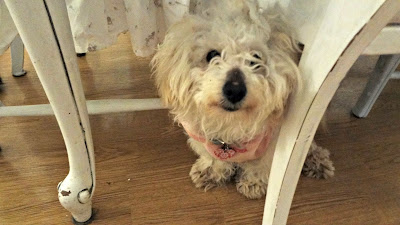 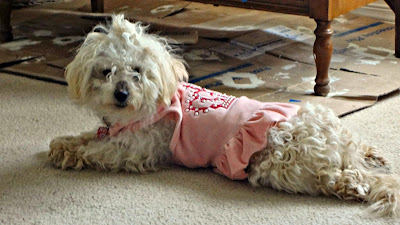 I guess our prayers worked because a few hours after the first time I talked to the owner she called me back and said she had talked her her husband and kids and her kids had said she deserved to be in a better home! They realized they were not home enough and didn't have what it takes to care for a little dog. They said we could have legal ownership of her. It was a happy day in our house! 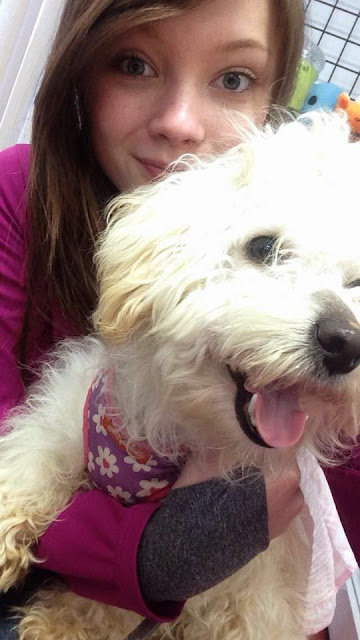 Within a week the poor thing was shaved, spayed, shots, microchipped...she got the works. I am not so sure at that point if she thought being rescued was such a great idea.
She went from looking like this... 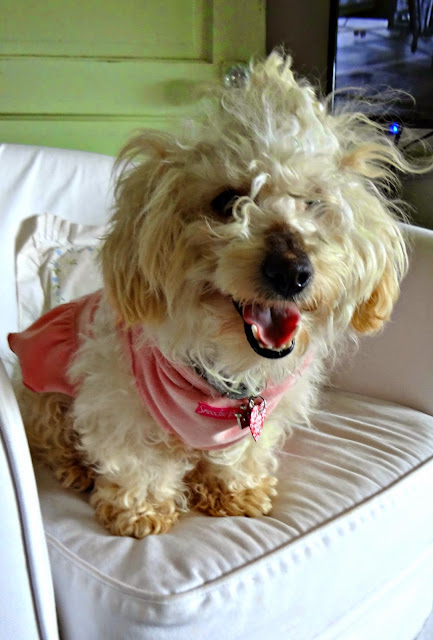 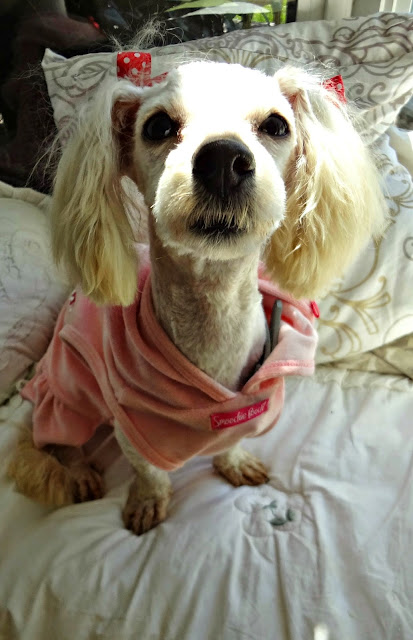 She was not a big fan of wearing the cone. :( 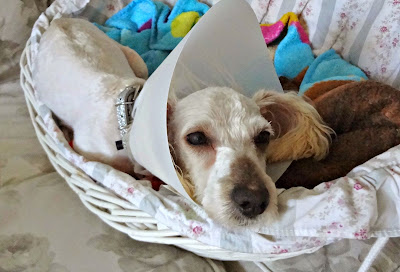 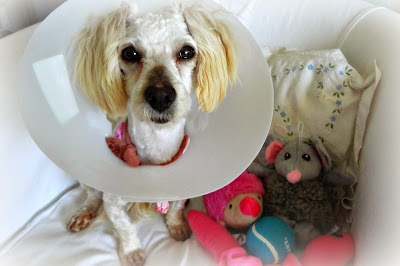 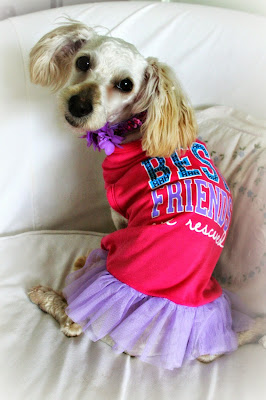 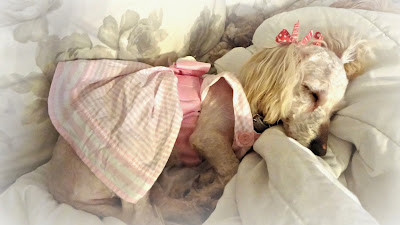 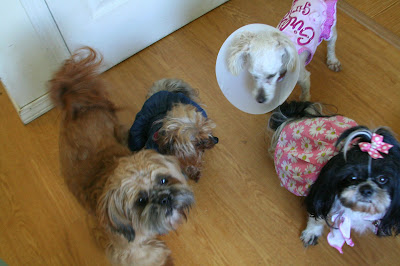 Our other dogs kept hoping she would go back home with Janae...like most new dogs in our family do. 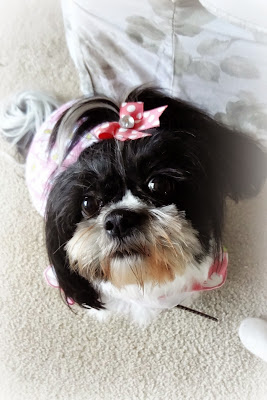 Daisy seemed extra jealous but I just try to give her extra attention.

We decided to name our new family member Dahlia. All our female dogs are named after flowers and all our dogs names start with a D. 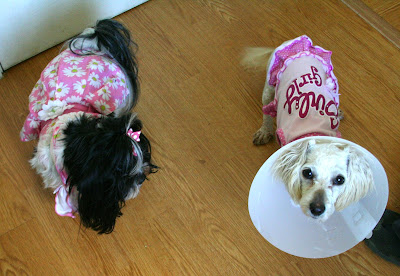 Dahlia's life has changed big time. She went from being caged to being a dog on the go.

She loves to go on car rides...sometimes using a sleeping Ninja Turtle as a stepping stool :) 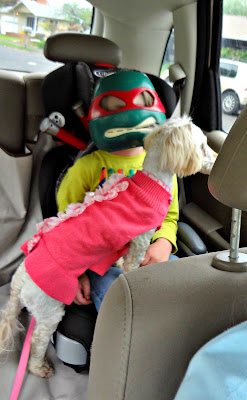 She recently walked 2.5 miles in the Portland Doggie Dash to raise money for the Oregon Humane Society. That was a big deal because about a month ago she didn't even walk that well. 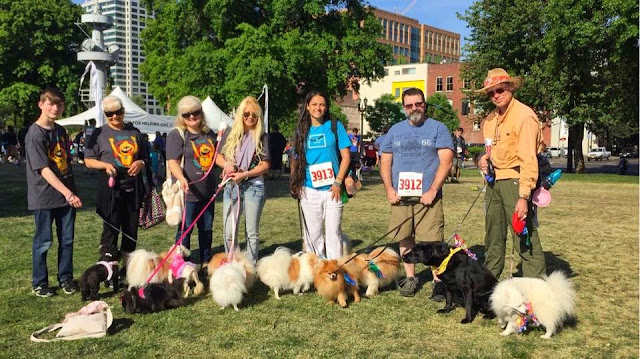 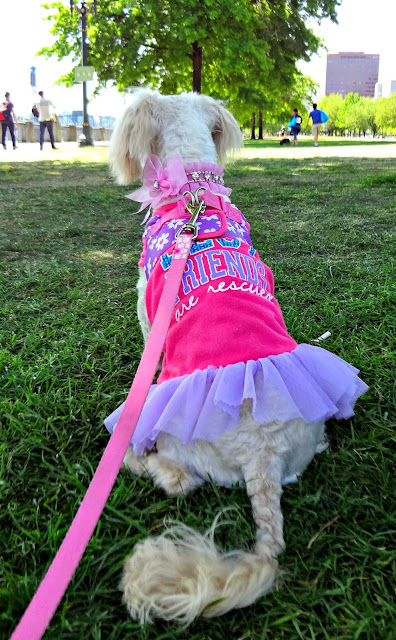 She is a happy girl living a happy life and we are the lucky family who gets to love her! As much as I don't like how the previous owners treated her I am thankful they were good enough to give her to us and realize she deserved better. Her nose is healing up now, and her hair is coming in and before you know it she will look like a pampered poodle! 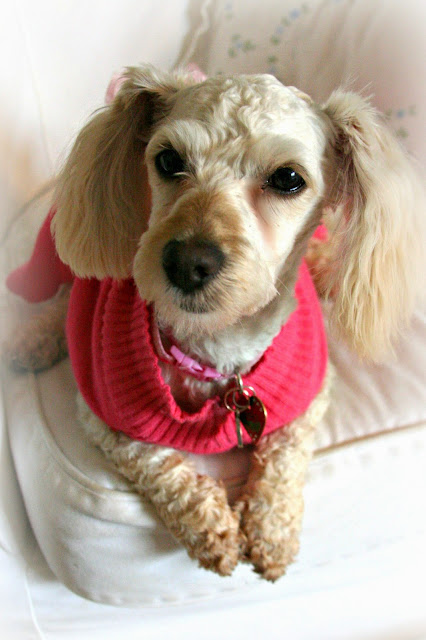 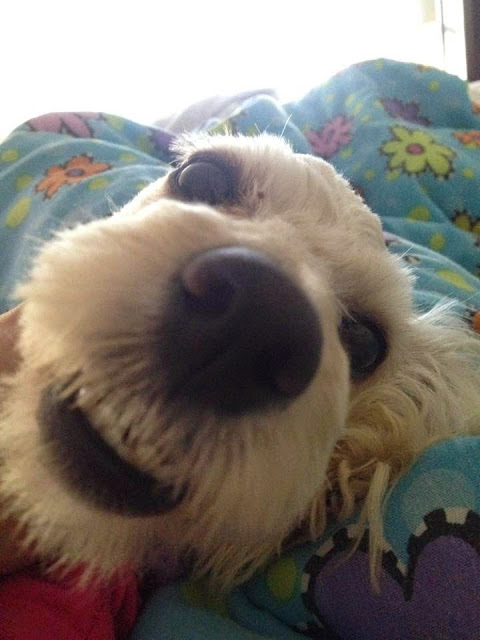 Thanks for visiting!
Posted by Shabby chic Sandy at 11:26 AM 35 comments: