A new furbaby in our family

It has been so long since we have had a kitten. Since I showed and bred Silver Persians for years it has been weird that for about 10 years or so we have not had a kitten. Our 2 cats are very old. They one of them has much of a desire to do anything but sleep and eat. The thought of a playful little kitten delights me. Especially at the age that the kids are now. We are a family of animal lovers and a kitten/young cat will bring a lot of joy to our family. For years I haven't gotten another cat as to not upset the 2 old ones..but at this point I really don't think they care.:) I think they will totally ignore the little one.

I think this is what love at first sight looks like! 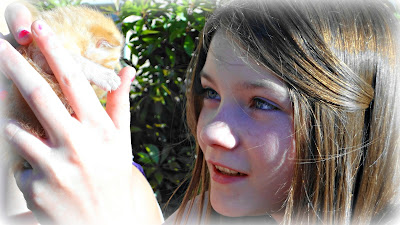 After thinking about getting a "real cat" (which is what my husband calls any cat that doesn't have a flat face) and talking about it with my husband, I got on Facebook. It seemed like fate. My Ex-husbands wife, Karen,  posted they had just had a surprise litter of kittens. Their daughter's cat had gotten pregnant before they had had a chance to spay her. I contacted Karen and she said she would be happy to give us one of the kittens. A few days later we went to see them. 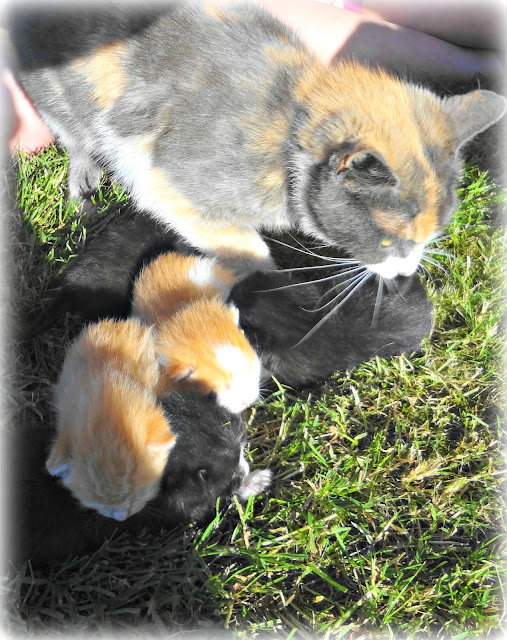 They were so sweet! I loved the black and white ones (they would match my Daisy:)) but the kids agreed (which is unusual) they wanted the orange little female. 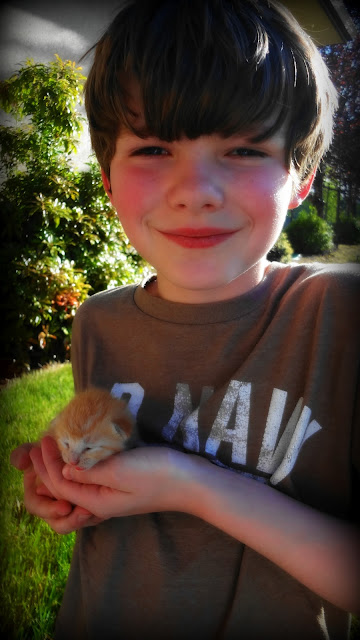 Wyatt said she looks like a hamster at this point! They were 10 days old when we visited and her eyes were just barely looking ready to open. 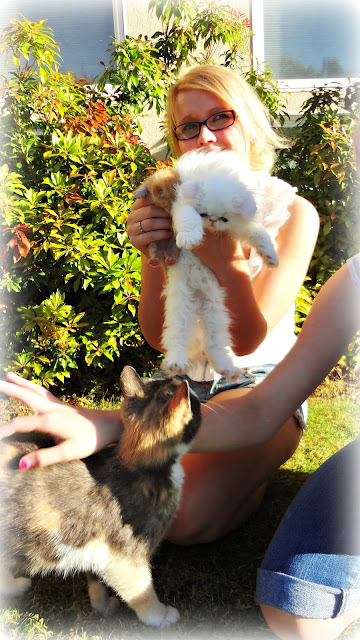 Janae brought Billie over so her sisters could see him. The Mama cat did not want Billie anywhere near her kittens! A sign of a good Mother:) We think Billie is so tiny..but he looked like a big boy next to the kitten! 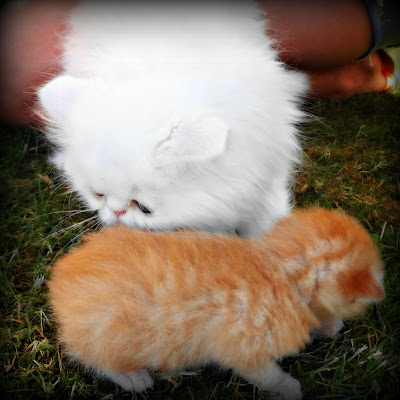 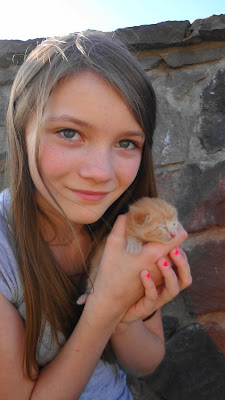 The kids are counting the days on a chalkboard until she is 6 weeks old. Who knows if she will be ready that young or not. We will let Mama kitty decide. The Mama kitty is a outdoor cat so the kittens are outside. Which worries me a little. I hope all goes well. We will have her as an inside/outside cat. I don't want her wandering the neighborhood so I am hoping she will stay inside our fenced yard. I want to get her as young as possible to litter box train her. 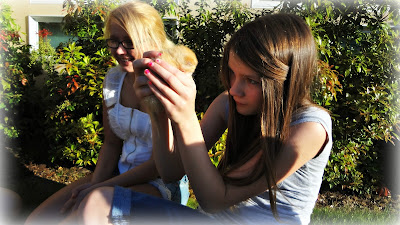 The kids have had so much fun thinking about her coming to live with us. They look at toys and collars and all sorts of kitty stuff every time we are at a store. This will be one spoiled kitty. They have named her Phoebe (we as a family are huge fans of "Friends") and her theme song will be "smelly cat". Every cat has a theme song, right?! Well, we hope she isn't too smelly but that song just makes us smile. 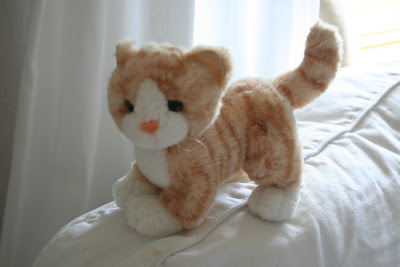 We got this little stuffed kitty at a thrift store for 27 cents. We figure it can be her little friend when she moves in.

A few days after we saw them Phoebe opened her eyes. Karen was nice enough to send us pictures. 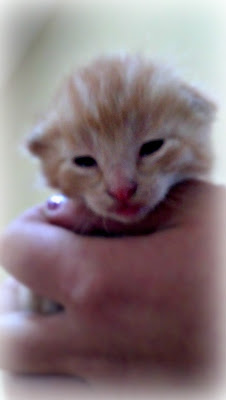 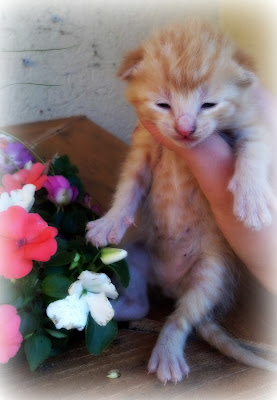 I texted with Karen tonight and they are a little over 2 weeks old and she said still healthy little babies. Getting cuter by the day. We can't wait to bring Phoebe home. I was thinking today, if she lives to be as old as Sassy is now, Chantel will be 30, and Wyatt and Gage will be 29. Wow. I don't even want to think about how old I will be when she is Sassy's age! 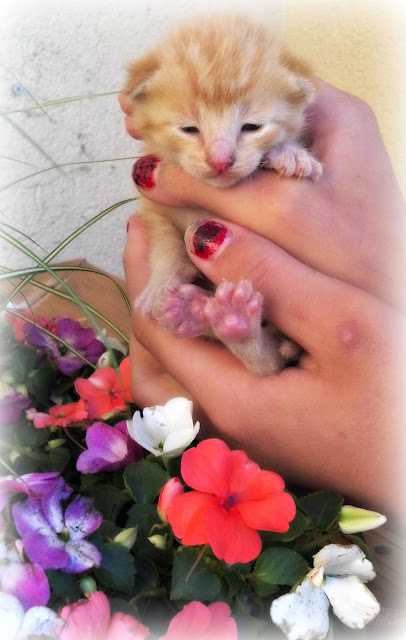 Welcome to our family Phoebe!

Love that name!! Laughing at the theme song! My cats currently do not have a theme song, but they get nick names, does that count? They know their nick names as well as their regular names and will come to either name.
Phoebe looks precious, I know that you and your family will love and enjoy this new addition to your home!

She's a little cutie! We have 2 "outside" cats, and both have recently had kittens, though the one mama hides her babies, and we haven't found them yet, lol :) I have nick-names for 2 of the 3 inside cats, Max is referred to as "Booboo", and Estella is "She-devil", lol :) Annie, is just referred to as Annie :) She's my "good" kittie, lol :)

aw, when I was a young girl I was so lucky to have a mom and dad that let me have many pets, including kitties! I had quite a few and it is always special when they are kittens. Little Phoebe will be in a well loved home for sure!

I love her. She is sooo sweet! I don't blame the children and you for being so excited. I would be counting the days too! I know Phoebe is going to get so much loving..

Your sweet new Phoebe is just so adorable. A new baby kitten...what a joy. Our precious catdied 3 years ago and I still miss her. She was only 13 though. She was so beautiful and how we loved her.

Wish you lived next door. Yourfamily are all so precious. I've come to love every one of them. You truly are a family full of love.

Chari at Happy To Design said...

Awww...your new little kitten is just precious! Truly...is there anything better than a little furball kitten? Hehe! My honey and I are "cat" people. We love kitties and have several. I'm sure that your kiddos will be counting down the days till they can bring their baby home...sooo sweet!

I just read your sweet note, my friend. Thank you so much for coming by...I sooo enjoyed your visit!

Your new kitty is very cute. Congrats on the new addition to your family. We used to have four cats, and one of them lived to be 21. Her vet said she had really good genes and the fact she was primarily an indoor cat helped her live that long. She went to the rainbow bridge almost 3 years ago. No more kitties for us. Now we have 4 indoor dogs. Trust me, a cat would not like our house. Yet they are still adorable.

I hope you and your kids find much happiness with your new furbaby.

As an experienced foster to stray Mama cats and kittens for the local humane society, may I offer some advice? If this is an outdoor cat, I would recommend that the owner bring her and the kittens inside and this for several reasons. First, there are several predators outside (hawks, racoons, coyotes, etc. depending on where you live, even dogs) and those little ones are very vulnerable. Second, the nights are still cold. And third, new mama cats love to move their kittens after a couple of weeks, it's a protective instinct they have. Even in our house, they have to move them. We have to provide them with a few options to move the kittens or else they go nuts. So you risk having the mom move them to a place where you can't find them. She may lose one during the move. A lot of things can happen. I know an outdoor cat doesn't like to be confined but this is for her own good.

I would also recommend that you make your cat an indoor cat only, for all the dangers I mentioned before, plus of course, being hit by cars. Outdoor cats have a much shorter lifespan. And, of course, don't forget to spay. That's my Bob Barker bit for the day, lol!

All that said, she is a beautiful mom and the little one you have chosen is gorgeous!

Oh, and one more thing. I would wait til she's at least 8 weeks old, even longer if you can be patient, to take her away from her mom. Kittens learn socialization from their mom, she needs that time with her, not to mention that she will be nowhere to being weaned at 6 weeks old. She also need mom's milk to build a really good immune system. If the owner does as I say and moves them in the house with a litter box, no training necessary, they automatically go in the box at five weeks, the age where you can start feeding them a bit of kitten food. (Mom should also be on kitten food while she's pregnant and nursing.) This is where they learn from Mom and go in the litter box like her. They learn amazingly fast!

phoebe is so cute, --she will be spoiled in no time--look at your daughter's face!

Such a cutie! I can see why your kids are so excited and counting the days!

She is such a cutie! I am excited for you and your family.

Awwwwwwwww! Nothing is cuter or funnier than a little kitten, and i love tabbies, they have the most wonderful personalities. She's beautiful!

Phoebe is adorable! I want a kitten now.