Our Pets on Parade!

Well, it is finally time for me to join the pet parade!

These are not all living at my house but 3 of them belong to Janae and just visit "Grandma and Grandpa's" house. This is Dafney, Bella, Lacie, Little Bunny FuFu, Big John, Daisy and Duke. 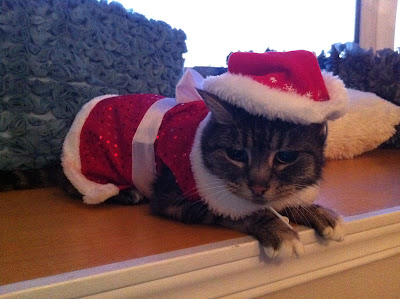 The only one not pictured in the group photo is Sassy. She did not want to sit with all the other animals and as you can see was not too happy about the whole idea of wearing a Santa suit. Of course, who could blame her. She is a 16 year old silver tabby. We got her in front of a grocery store when the little girl who was trying to give her away told me her Dad would kill her if she didn't find a home for her. Janae was 5 at the time and pleaded with me, "please Mama please!".Sassy has been a part of our family ever since. She had to put up with years of Janae dressing her up and playing house with her. On her first birthday we had a party with like 7 guests and a cake with her portrait on it. I guess I am to blame for a lot of the spoiling that Janae does with her pets now:) Pets are people too in our family. 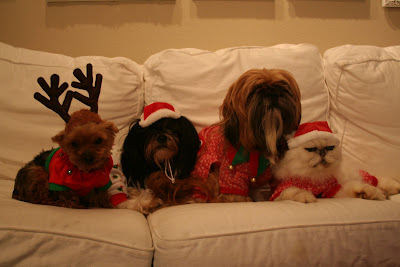 Jerry and I went to a wedding on the night that Janae, Chantel and Wyatt took these photos of the animals. Thanks kids! Dafney is the reindeer suit was born at our house when Chantel was a baby. I used to breed Yorkies. Chantel was obsessed with Scooby Doo and that's where the Dafney name comes from, though I decided to spell it in a original way. She is about 4 lbs..her father was only 1.5 pounds (his name was Itsy Bitsy). She is really starting to show her age..her Father had the same problem..no matter how much we cared for her teeth she keeps losing them. Bad teeth genes! Now the poor little thing lets her tongue hang out half the time. She is Daddy's girl--when my husband goes to bed I always hear him whistle for her to come to bed and she runs in and gets under the covers with him. Duke is our male Shih tzu. We got him shortly after getting Daisy. Jerry bought him as a surprise (I had a good idea we would be getting a friend for Daisy) and Wyatt said the day we got Duke was the best day of his life. Duke was one of the cutest puppies I have ever seen. He is 5 years old now. Everybody loves him. Not the worlds smartest dog but very lovable! Big John (the cat) was also born at our house about the same time as Dafney..when Chantel was a baby. I used to show Silver Persians besides breeding Yorkies..nuts, I know! 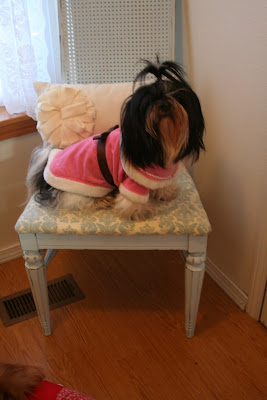 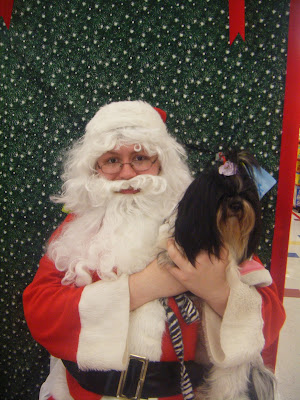 Daisy is my girl. From the moment I saw her I just bonded with her. She is a very mothering dog though she has never had puppies. She is always in charge of all the other dogs and shows concern about everything that happens in our household. She is totally connected to our disabled son, Gage, and if he starts to show signs of getting upset she will sit next to him and howl. I have never had a dog before that howled. If you don't immediately come to Gage she will then go looking for you and howl and go running back to Gage. She is a very special dog! 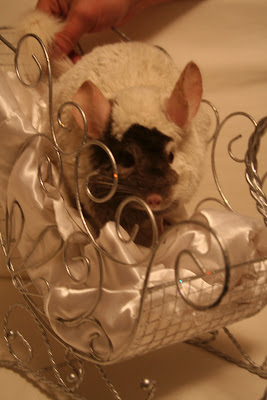 This is Coco. We had one litter of Chinchilla's once quite by mistake and Coco is the one we kept. She has such adorable markings that we had never seen on a chinchilla before. She is so soft.  She spends her nights running on her flying disc and her days sleeping. Her and I are both night owls! 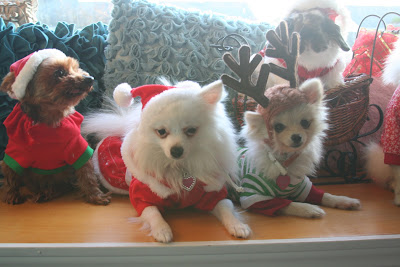 Thanks for stopping by our holiday pet parade. Be sure and stop by the party at Bunny's (link in upper left hand corner) and maybe post your pet too! I love seeing everybody's furry babies!

Posted by Shabby chic Sandy at 9:31 AM

Hi Sandy! What dolls and they all have costumes! Too cute! Thank you for popping in to see my little Chloe Dawn.
Be a sweetie,
Shelia ;)

Now those are the cutest pictures I have seen all season.

What a cute bunch of babies you have here! Love the photos, hope they got lots of treats for being so good and photogenic!

Hi Sandy!
All your fur babies are adorable! I love the picture where Big John's tongue is peeking out. I am amazed that all the dogs, and cat, sat for that group picture!

Sounds like Daisy is a great little dog... helping you with Gage.

Thanks for sharing them at my Christmas Pet Parade!

Don't forget Bunny too! He is amazingly sat still the best he's such a sweet little boy.

Just adorable! These little guys are all so cute. Isn't it wonderful that God gave us pets to love.
How in the world did you get the kitties to wear outfits. If I even attempt to put something on mine they have a fit.

love the pics, sandy! such adorable pets, and i'm amazed how well behaved they are when getting their pics taken! that warrants lots of treats!

Hi Sandy, oooh all of your fur babies are so precious!... animals are so much wiser than alot of humans, how sweet Daisy looks after Gage... I love people who love animals... I have spent my lifetime rescuing and placing the little "saves" in homes (many times my own!)... our sweet Tessy was a stray we just saved last February... she truly was Heaven sent and has brought so much joy into our lives... thank you for sharing your babies... kitty and doggie kisses sweet little ones!... xoxo Julie Marie and Tessy

I love your tree....but when I saw these darling animals I just flipped! LOVE...kisses to them all and Happy Holidays, and thank you for visiting my blog:-)

What adorable little furr balls, this is the SWEETEST post ever!!! Just precious!!!

They are all beautiful dressed in their Christmas finery. Mine would never sit together like that!