As many of you know my daughter, Janae, has been very into her pet photography and dressing her pets for Halloween. She has done some amazing portraits for the contest! On my sidebar there is a link to her blog if you want to check it out. Anyway--today we went to the instore Petsmart pet contest. I was so proud of both of my daughters and how they dressed their pets, and themselves! 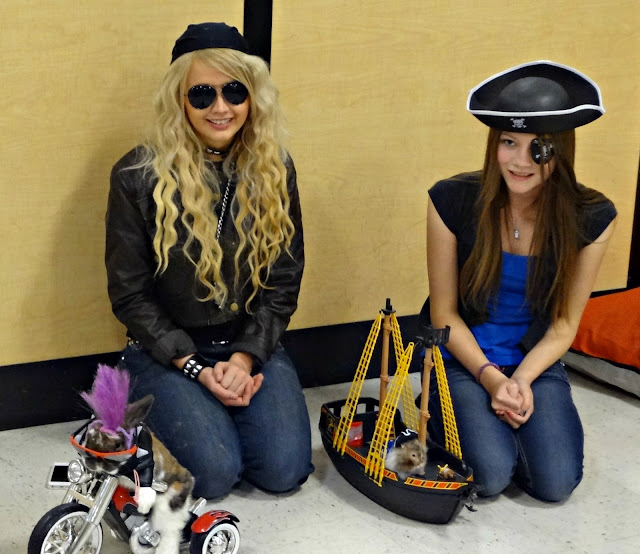 Here they are at Petsmart. This is Bunny biker Fufu with biker Mama Janae and Pirate Walter the hamster with Mama Pirate Chantel. 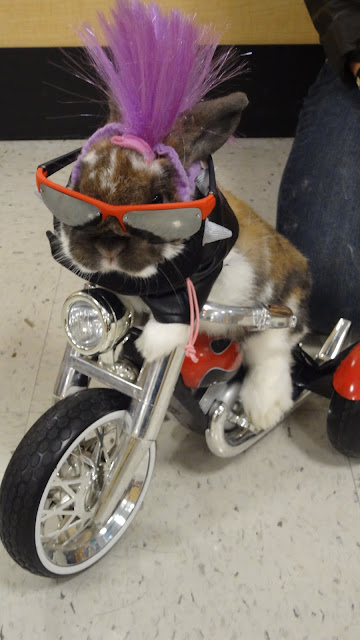 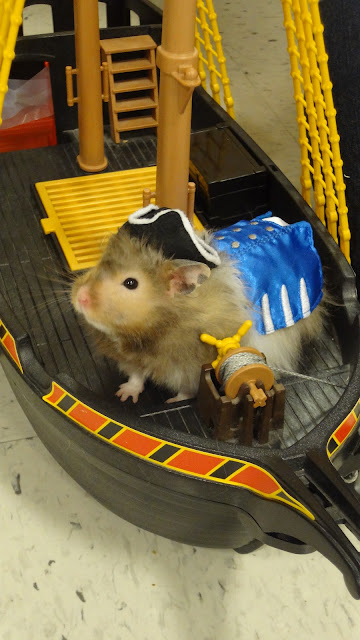 They had to sit calmly for over a half hour when people went on and on about how cute they were and took pictures. People were especially impressed with Fufu--because most people have not seen a bunny so well trained. There was only once that it seemed Fufu and Walter planned it and they both tried to escape at the same time. :) 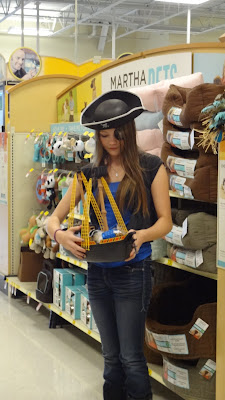 Chantel and Walter led the pet parade around the store. 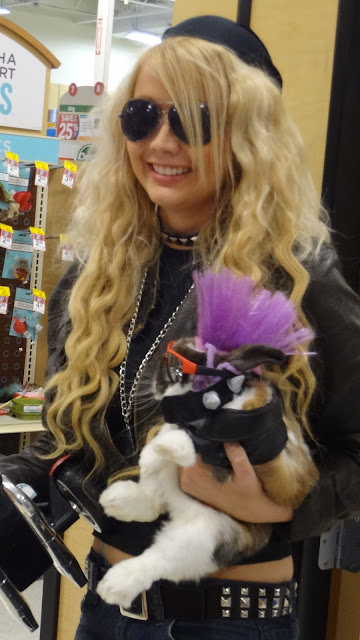 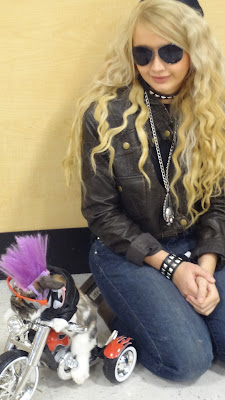 They had their pictures taken by many. 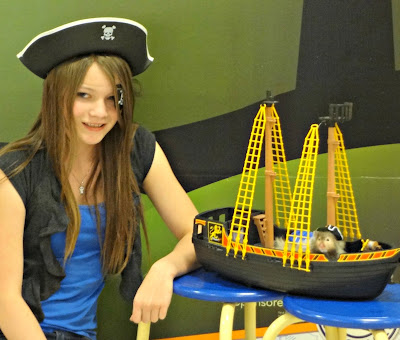 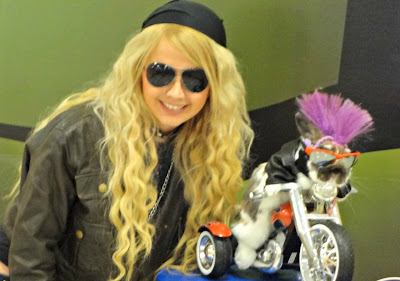 The lighting in Petsmart was horrible so I am not going to win any photography awards but you can see the fun they had. 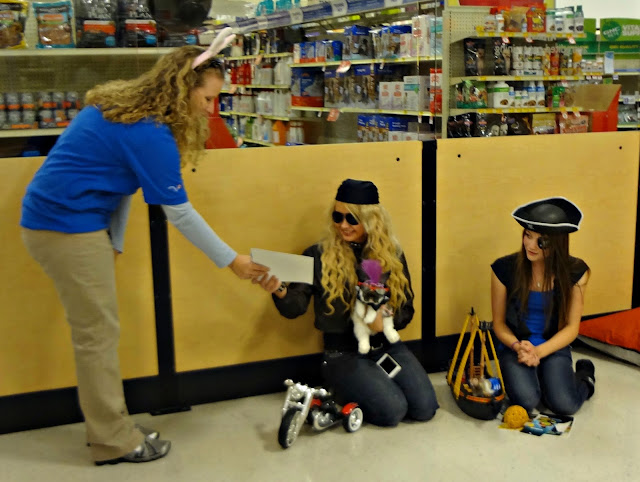 Janae and Fufu won first and Chantel and Walter won third. The prizes aren't big for the in store contest --they got some cute toys and Fufu got a $10 gift certificate and Walter got a $5 gift certificate. Walter was especially thrilled with his toy. He chewed on it all the way home. Now we have our fingers crossed they do well in the online contest--top prize there is $10,000.00!

So I will end this post with a photo of the boys taken during spirit week. It can't be all about the girls:) This is the boys on Super Hero day--I made their capes. What cute kids I have! 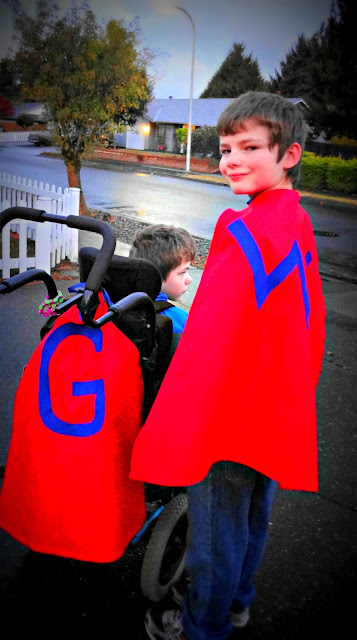 awwwh,they are all so cute,including the boys. I wouldn't be surprised if they win the big one. They are so clever with their ideas. xx

Thank you Mom for comming with us to take photos so we can remember our fun day!

The girls and their pets are delightful! I'm so glad you went with them to take pictures. Not only the pets were cute, but so were Janae' & Chantel. So glad they won.

Yeah! I'm so happy for them! The costumes are adorable on all! Please convey my congratulations! I'll continue to vote!

How fun and they all looked great, Sandy! Congrats to both of your girls for winning a prize. I'll keep my fingers crossed for the online contest.

You have a wonderful family, Sandy! Those costumes are just too adorable. How do those critters stay so still? I'm amazed! I wish them the best of luck on the contest.

Sandy how cute!!!And how cool that they won too!Those costumes are great!
xx
Anne

Hi Sandy,
You do indeed have cute kids, and I love how close you all are as a family, simply beautiful!
(the pets are really cute too!)
enJOY a lovely week,
Kimberly

I'm always amazed at how well trained those animals are! That little bike is the cutest! You have a lovely family!

Not surprised at all that they won. You do have cute kids!Xo, Patti

Awwww, they are all darling!!! I hope they win the big contest. You are such a good mommy!!! xoxo
Olivia

This was too cute! Keep us posted!

Oh Sandy....definitely cuteness all around. Good luck to your daughters.

Adorable! the photos made me laugh out loud... so cute!, and so are the boys with their capes! What a creative and fun family you all are...

How adorable...and creative on the girls part!

I don't know how she gets the pets dress up...She definitely has a future in pet photography...Congratulations, crossing my fingers for $10,000

Everyone is lookin' good. Those dressed up pets just crack me up!

I couldn't believe the FUN FUN pets costumes. Theyjust brought a smile to my face. What a bunch of neat kids you have!!! Can I adopt them??? They are one creative group!! N.

Your children are adorable. Janae and Chantel look so cute and their fur babies are amazing. I just cant get over the biker bunny.

Your daughters are too cute! Not to mention the pets! Happy Halloween!

You do have Cute kids they all are fabulous! Kids are amazing such precious lil Gems they are~Cheers Kim